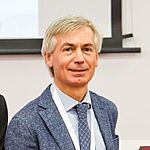 I graduated in Medicine in 1988 at the University of Padua and became a pediatrician there in 1992. From the beginning of my career I have been actively involved in many aspects of pediatric hematology and oncology, especially in chemotherapy for leukemia and lymphoma, supportive care, and early and late effects of treatment. I became clinical assistant at the Department of Pediatrics in Padua in 1994, and from that time I became interested in pediatric hematopoietic stem cell transplantation (HSCT). In 1996, I underwent a six-month training period as visiting doctor at the Bristol Royal Hospital for Sick Children. Following this I became Clinical Coordinator of the hematopoietic stem cell transplant program of the Pediatric Hematology Oncology Division in Padua. I held this position until November 2009 when I was appointed Director of the Pediatric Hematology and Oncology Unit at the Department of Pediatrics in Verona. I am a member of the scientific committees of several working groups including Pediatrics (for MASCC), Supportive Care (for SIOP), Aplastic Anemia, Infection (for EBMT), hematopoietic stem cell transplant, Infection, Supportive care (for AIEOP). In 2005 and 2015 I was appointed Chairman of the Supportive Care Group and Infection of AIEOP (Italian Association of Pediatric Hematology Oncology), respectively. In 2010-2016, I was the Chairman of Infectious Diseases Working Party of European Society for Blood and Marrow Transplantation
Joined May 2020 · Pediatric Hematology Oncology, Department of Mother and Child, Azienda Ospedaliera Universitaria Integrata Verona, Italy